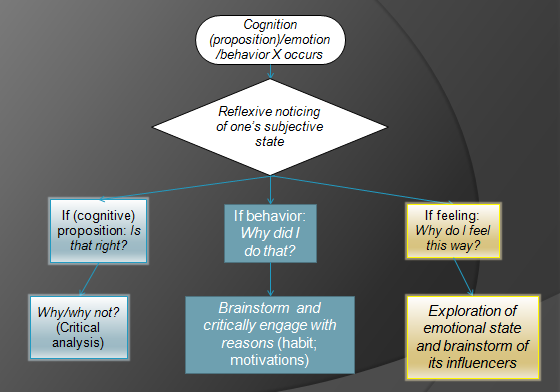 “…How are people to become aware of their more destructive acts to begin with [e.g., of environmental disregard]—the fact that they, themselves, might be committing them regularly?

“The [phenomenological-critical] method can be performed mentally or verbally. Where individual privacy is of concern, the former would be preferred, and where other people can help one become aware of something less subjectively-accessible the latter would be. The step-by-step logical form I have chosen may dovetail neatly with efforts in schools to teach algorithmic thinking (e.g., through the instruction of computer programming), and it would likely prove most prudent to encourage such a habit of critical awareness from a younger age. However, the general method may just as well be practiced by any capable adult in any other realm or mode of existence.

“Naturally, people who think less linearly may find the method disagreeable, though it has been deliberately kept simple for early and general use. The method’s efficacy will also covary with individual differences in temperament, personality factors, attention-distributive tendencies, motivation, and health conditions, and would require appropriate adaptation for non-English speakers” (Sood, 2016).

See my other pages